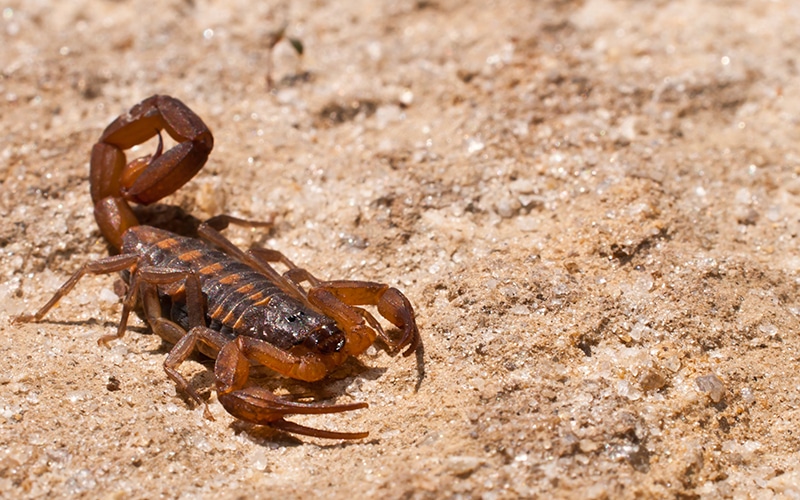 Scorpions are nuisance pests that are closely related to spiders, mites and ticks. There are about 1,200 scorpion species in the world and 70 species in the United States. Of these, the most dangerous species is the Arizona Bark Scorpion, which is found in the American southwest and in Northern Mexico.

Scorpions are nocturnal pests, so they hide during the day and are most active at night. They feed primarily on insects, especially crickets and cockroaches, and they also feed on spiders. However, they can survive for months without food if water is readily available.

Scorpions live in dry habitats, usually preferring deserts and semi-arid regions. Many species dig burrows in the soil and hide under rocks, logs or debris. During periods of hot weather, scorpions may enter homes through wall voids and take shelter in cool, moist areas like crawl spaces and attics.

Scorpions are known to sting as a defense mechanism or as a way to kill prey. Humans will usually experience mild symptoms that are similar to that of a bee sting, such as temporary pain, a burning sensation or localized swelling. However, there are a handful of species around the world that possess more dangerous venom, which can be potentially fatal to humans. The Arizona bark scorpion in the U.S. can deliver such fatal stings.

Color:
Varies in shade from yellowish brown to tan
Legs:
4 pairs of legs and a pair of pinchers
Shape:
Segmented, long tail with stinger at the end
Size:
2-4” (20-100 mm)
Antennae:
No
Region:
Arid southwest and southern part of the United States