Did you know there are almost 1,100 species of spiders in Texas? Most are not dangerous but a few like the Brown Recluse and the Black Widow are venomous and a danger to humans. It’s important to be able to identify common spiders in Texas to protect yourself and your family.  And it’s helpful to understand how to help control these spiders from becoming pests in your home.

Spiders are arachnids which are animals with eight legs and two body regions: the cephalothorax and the abdomen. Spiders have 6 to 8 eyes and are varied sizes and colorings. Male spiders are smaller than females.

Let’s look at 5 common types of spiders found in Texas: 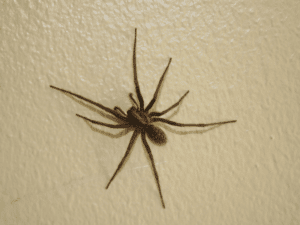 We’ve all seen the common house spider. It’s a small brown spider with white and dark patches and lines. House spiders are not aggressive and are harmless. However, if provoked, they will bite but the bite is not toxic.

House spiders build their webs in the corners of your floor, ceiling, and windows. They may even swing across the room from light fixtures and fans.

While house spiders may be a nuisance, they are beneficial. They act as natural pest control eating other insects. Flies, mosquitos, earwigs, and moths all fall prey to the house spider’s web.

Wolf spiders are another common spider found in or around Texas homes. They are large spiders and may appear scary looking but do not pose a threat to people. Although they are not poisonous, it is possible to be allergic to a wolf spider’s venom.

Wolf spiders like to hide in wooded areas, beneath rocks, and in and around shrubbery. They prefer warm climates and dark, cozy places. They also look for areas where they can easily find food.

Wolf spiders are nocturnal, coming out at night to seek prey.

There are over 100 species of jumping spiders in Texas. The most common is the bold jumping spider. These spiders have fangs and produce venom but are not poisonous.

Jumping spiders do not seek shelter indoors. However, they often end up in your house after hitching a ride on packages, plants, and people. Once inside, you can find them hiding under furniture, in cracks and crevices, and behind windows and doors. 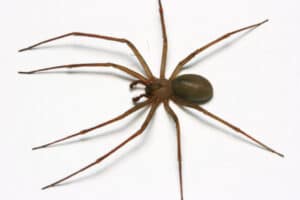 A brown recluse is very venomous. And it’s one of the most feared spiders in the United States. If you see one, you definitely don’t want to pick it up. A bite from a recluse spider is serious. Requiring immediate medical attention. In fact anti-venom is necessary to combat the toxins.

Recluse spiders prefer undisturbed, isolated habitats. You can find them outdoors in hot, dry climates like Boerne and the rest of the Texas Hill Country. They can also be found  indoors hiding in unsuspecting places like shoes, closets, and garages.

Brown recluses are medium-sized spiders no more than ¾ inch in length. They have 6 eyes and a dark brown violin shape on their back. 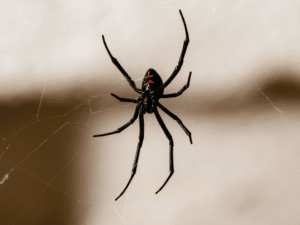 The black widow is another venomous spider found both indoors and outdoors throughout the state. Black widows can grow as large as ½ inch in body size. With the legs extended, it can be as much as 1 ½ inches.

The distinguishing feature of a black widow is the red, hourglass shape on the underside of their belly.

Be careful! A bite from a black widow is dangerous. The venom affects your nervous system causing painful swelling at the bite site, muscle spasms, and nausea. In rare cases, the poison may lead to seizures and even death.

If you experience a black widow bite, seek medical attention right away! Elderly and young children especially are more susceptible to serious reactions. 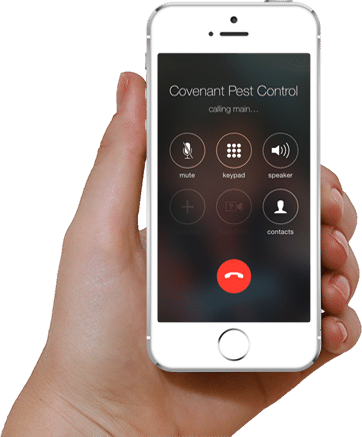 Speak to someone real!
We are here to help you from 8am to 5:30pm
Free estimates & military discounts.
We Guarantee Service that is set apart!

Lifecycle of a Spider 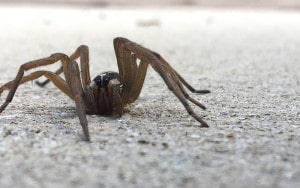 Spiders have a three-stage lifecycle: egg, spiderling, and adult.

Female spiders lay an egg sac containing anywhere from 4 to 600 eggs. The female then dies shortly after laying her eggs.

Once the spiderlings are born, they immediately seek food. Some spiders will lay their eggs in a web to capture prey for their offspring.

As they grow, spiders molt by shedding their outer skin. In fact, spiders will molt 5-10 times before becoming adults.

In general, spiders live about a year if they do not fall prey to humans, rodents, birds, and climate change.  Insects like wasps, centipedes, and scorpions also like to eat spiders.

Pest control services interrupt the life cycle of the spiders so they don’t continue to reproduce in your home.

What do spiders eat?

Spiders eat insects. They are nature’s pest control. Most spiders build their webs near bright lights since the light attracts all kinds of flying insects for a spider’s feast!

How should I treat a spider bite?

Most spider bites cause a red, swollen, itchy, and painful bump at the site of the bite. If you experience a spider bite, wash the area with warm, soapy water. Apply an over-the-counter antibiotic cream to prevent infections.

If the bite is painful, you can apply ice or a cold washcloth to help reduce the swelling.

If more severe symptoms develop, or if you know the bite was from a black widow or brown recluse, seek medical attention immediately.

How do I protect my home and family from spiders

The best prevention for spider bites is to limit their access to your home. Seal all entry points and when you see a spider or web, remove it immediately.

Covenant Pest Control specializes in integrated pest management. We’re the ones to call if you have a problem with unwanted pests including spiders. We’ll provide a FREE inspection and create a comprehensive treatment plan for your home.

So, if you’re concerned about spiders in your home or just tired of fighting cobwebs around your porch lights, give us a call.

We put the safety of your family first. You can trust us to treat your home and yard with family and pet-family products. Ask us about our all-natural, organic pest control for spiders.